This article lists the top Kodi alternatives to streaming movies and shows. These options offer streaming options for a variety of media devices, including FireSticks, PCs, Mobiles, and many more.

Kodi is a powerful media tool with tons of features. It supports hundreds of add-ons and many builds. Kodi is one of the most versatile media players I’ve ever seen. Kodi isn’t the easiest to use and takes some getting used to. Some users may find it a bit overwhelming.

Kodi isn’t the only media platform. There are many other media services, some of which are easier to use than Kodi. They can be used as a Kodi alternative. It would be a smart idea to use them with Kodi. While you learn the Kodi app, there will be plenty of content to stream.

Stremio has some similarities to Kodi. It is therefore one of the best alternatives to Kodi and strix(you can check how to install strix). Stremio, which is a cross-platform media platform, lets you stream movies and shows as well as live TV. It can be accessed through many channels, and it can also be sideloaded.

Stremio works in the same way as Kodi. It supports both official and unofficial video streaming, and utility add-ons. The only difference between Stremio and Kodi is that Stremio addons cannot be installed locally. These add-ons can be installed online and tied to your Stremio Account. You can install any Stremio Addon on one device. It will be available on all other devices that you are signed into the same account. It doesn’t need to be installed on every device.

You don’t need to manually search Stremio add-ons, unlike Kodi. All the available add-ons are listed in the app’s add-ons section. These add-ons can be installed with a single click.

Stremio also has higher user-friendliness than Kodi. While there is a learning curve for Kodi, Stremio can be used immediately.

The home screen displays featured content. You can explore more by visiting the Discover section. You can easily manage your library with the My Library category. All Stremio devices can sync the library. To retrieve streaming data from other apps or services, you can also sign into your Trakt account.

However, Stremio may not be as flexible as Kodi. While there are a few third-party add-ons available, Kodi offers hundreds. Also, the Stremio interface cannot be customized. There aren’t any skins or themes that you can choose from. Stremio is a great platform for streaming your favorite content.

Plex is another great alternative for Kodi. Plex’s client-server architecture is its true strength. This allows you to access all of your media from one central location. Plex allows you to create your media server instead of depending on others.

Plex works in a very simple way. You only need to set up your computer or a Nas device as a server in order to access local media from the server on any client device. Plex client can be used on many platforms, including Android, Amazon Fire TV and Computers, iOS, Android TV Boxes, and many more. The client and server do not need to be connected to the same wireless network. As long as the client and server are connected to the same wireless network, the client can access the server anywhere in the world.

Plex supports a variety of official and unofficial plugins. These are more commonly known as Plex Channels. Plex Channels work in the same way as Kodi addons but are installed on the server so they are available to all connected clients. These channels allow you to watch unlimited TV shows and movies.

Basic services are available for free, but Plex Pass (premium Plex) provides additional benefits such as mobile sync, media downloading on the client device and Live TV & DigitalVR, camera upload, auto photo-tagging, and much more. Otherwise, you can download movie plus  Plex is a great alternative to Kodi, especially if your goal is to stream local media across multiple devices.

Emby, just like Plex offers a client-server design. You can access your personal media on any device you choose. Emby and Plex actually share many similarities. Both allow you to access the server media from any client. It is possible to use both on a wide range of devices. These devices allow you to stream live TV and provide easy DVR management.

Embry’s user-friendly interface makes it easy to stream in minutes. Your personal media can be easily managed and organized. You can rely on the support of a community that is always available to answer any questions you may have.

Emby, like Plex and Kodi, does not offer any content. It acts as an aggregator, pulling content from different sources. It supports both official and unofficial plugins, allowing for easy access to many online media.

Emby also offers premium subscriptions, which allow you to enjoy exclusive features like mobile sync and offline media, DVR and cloud sync, as well as cover art and other special features.

We chose Emby to be the best alternative to Kodi for the reasons we listed above.

Media Portal is an open-source media tool that converts your computer into a media hub. It connects easily to external devices like your TV, projectors, and DVD players. This allows you to organize media in a more intuitive way. Only Windows users can access Media Portal. It can be run on even moderately-equipped devices. It is therefore not resource-intensive.

Media Player 1 and Media Player 2 are the two versions of this media service. 1 is the stable, older version. 2 is still under development. The developers state that MP2 is stable, and they are working on further improvements.

Media Portal supports many plugins, which allow you to watch TV shows and movies as well as listen to radio. Media Portal is a viable Kodi alternative if your PC is your main entertainment device.

OSMC was created for the people by the people. It is an open-source media center that is free and open to all. OSMC is mentioned by LifeHacker and The New York Times. The Wall Street Journal mentions it.

OSMC interface allows you to manage your movies, TV series, music, and other media. Debian support allows users to bring over 30,000 packages free of charge.

OSMC is not just free software. You can also do whatever you want with it because it’s licensed under version 2. It’s free to play with code and experiment with other things without restriction.

OSMC provides regular updates. You get all the updates you need, from interface updates to app updates.It’s also an alternative of the Latest OTT platform strix Apk. OSMC is more than a media center. It’s an experience.

Universal Media Server is a simple media server that streams media to a variety DLNA devices. It works with any device, no matter if it’s a gaming console or a TV. You can stream and use the web interface even if your device is not DLNA-supported.

UMC’s user interface is extremely simple. It doesn’t matter if you have ever used a similar application before, you won’t need to spend too much time learning how this tool works.

Universal Media Server can play a variety of video formats. It also allows you to adjust the bitrate automatically to match your internet speed. A team of active developers supports the tool with regular updates and software enhancements. It is a great Kodi alternative.

These top Kodi alternatives have been recommended to me, but I still love Kodi. Kodi can be customized to your liking and comes with hundreds of great plugins (add-ons) and builds. Kodi’s biggest problem is its ease of use. These alternatives to Kodi are the solution. Let us know which one you like best in the comments below.

Ifun TV: A Past loaded up with the World’s Most Well regarded Organization software 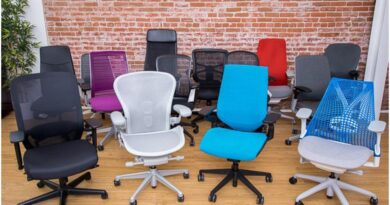 How to Disassemble an Office Chair: The Ultimate Guide